JO: Thank you for the invitation, Kristina. It’s a privilege to join you.

KS: To begin, can you tell us what motivated you to become a writer?

JO: I suppose it started one winter when I was a kid; I read a 2,000-page encyclopedia.

KS: Really? You’re not kidding, are you?

JO: Not at all. At the time, my parents owned a wilderness farm. We had little money. I was about eight one cold winter and wanted something to read in the evenings. The choice was between my mother’s romance novels and a huge Columbia Encyclopedia. As you might imagine, romantic stories don’t interest a pre-pubescent boy. So I spent the winter thumbing through that enormous, illustrated encyclopedia. I learned a lot of interesting things. But most of all, I gained a lasting thirst for learning and an attraction to reading.

KS: So how did you go from that unusual literary beginning to writing three books that won international awards?

JO: I must confess that early in my working career, writing was not the goal, but rather a means to an end.

JO: I was an investigative journalist. My motivation was informing the public about important issues. Writing was just a means to that end. But I soon came to enjoy creating images that the magic of the English language makes possible. So journalism served me in two ways: instilling a love for writing, and providing me with learning experiences that became resources for my books.

KS: I understand your debut novel last year grabbed quite a bit of attention on Amazon. 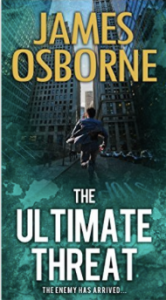 JO: Yes, I was delighted and a bit overwhelmed. Within a few days of its release in June 2015, ‘The Ultimate Threat’ became an Amazon best seller. Perhaps it’s the novel’s premise that grabbed everyone’s attention. The plot anticipates what could happen if ISIS was ever to establish a foothold in North America.

KS: I saw some stories in the news media recently about your books winning those international awards, in fact, I believe it was a hat trick of awards. Please tell us about that.

JO: It was extremely flattering to have my books win a first, a second and a third place in that competition. It’s one where readers from around the world vote on their favorite books. The poll is run by a non-profit organization called Preditors & Editors, so they have no hidden agendas. The group’s primary role is to provide resources for readers and to support writers. The readers chose ‘Encounters With Life’ as the Best Short Story Collection of 2015. ‘The Maidstone Conspiracy’, won second as Best Mystery Novel of 2015, and ‘The Ultimate Threat’ came third as Best Thriller of 2015.

KS: That competition also delivered you an added surprise, is that right?

JO: Yes indeed! Without asking, someone nominated me in the Best Author category. Evidently, there were thousands of authors nominated. I was hugely surprised and deeply honored to be awarded second place. First place went to an author from the US, and third was awarded to a British author.

KS: What other experiences have influenced your writing.

JO: Quite a few actually, and I’m grateful for them. My working life was varied. I’ve served as an army officer, a teacher, worked in product promotion and marketing, was a corporate executive and for 10 years owned my own business. Those various careers provided many valuable experiences, both for my novels and my short stories.

KS: Short stories seem to be outside the mainstream of your primary genre, yet they’ve won you some major awards.

JO: True. As much as I love writing novels, I have to admit that writing short stories is a form of recreation for me. Seriously. I’ve written somewhere around 110 short stories. I’m not sure. I’ve lost count. Writing short stories gives me a rest from working on novels yet it helps to stimulate my thinking about them. And yes, I’m pleased that some of my short stories have received awards. Several of them have appeared in anthologies, both in print and online. Samples are posted on my blog, http://www.JamesOsborneNovels.com.

KS: What’s next? Can you tell us what you’re working on now?

JO: Sure. Readers of both ‘The Maidstone Conspiracy’ and ‘The Ultimate Threat’ have been enquiring about sequels to both. As you know, Kristina, from your own exceptional bestseller getting responses like those from readers is very encouraging and at the same time, humbling. So, I’m pleased to tell you that sequels for both are in process. I enjoy working on simultaneous projects—it’s stimulating. And perhaps that’s why I’m also finishing up work on a second volume of short stories. The plan is, when finished it will become volume two of ‘Encounters With Life: Tales of Living, Loving & Laughter’.

KS: Before we close, would you tell us what writers have influenced you most in your writing career?

JO: Dozens of them. It’s a very long list, Kristina. I’ve read thousands of books over the years. Writing styles and plots designs are what I find most attractive. Perhaps that’s why my tastes cross many genres. A partial list of authors from the near and distant past that I admire would have to include: Charles Dickens, Leo Tolstoy, James Michener, Ernest Hemingway, Ian Fleming, Zane Grey and John Steinbeck. More recent authors on my hit parade include Dan Brown, Clive Cussler, Robert Ludlum, Nelson De Mille, Len Deighton, Jeffrey Archer, John Grisham, Tom Clancy and Michael Creighton. I could add at least a dozen more names to each list.

KS: Thank you, James, for taking the time to join us on Mystery Monday’s.

JO: It’s been a pleasure, Kristina. Thank you so much!

WHO IS James Osborne?

James’s working career began in journalism and then teaching journalism, after which he took a detour through the corporate world before returning to writing. That detour included becoming vice-president of a Fortune 500 company — a mixed blessing — and then president of a management consulting firm for 10 years. Those experiences made clear that a varied life, filled with a diversity of good and occasional not-so-good experiences, provides a huge resource for creative writing.

You can find out more about James’s novels at https://jamesosbornenovels.com