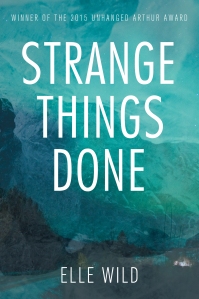 This week on Mystery Mondays it’s my pleasure to welcome Elle Wild,  winner of the Arthur Ellis 2015 for Best Unpublished Mystery and author of Strange Things Done.

First, congratulations to Elle. Strange Things Done will be released by Dundurn Press on September 24th, so if you’re looking for something noir to read, need a new thriller in your life, check below for the details on her book.  She’s generously shared her top five chilling reads, and didn’t include her own 🙂

Winter is Coming: My Top 5 Chilling Reads by Elle Wild

This is my favourite time of year: the snap of crisp air, the lingering scent of wood smoke, and the lengthening of shadows. Winter is coming, and I don’t mean that in a Ned Stark kind of way. It’s the season for books, and I can’t wait to stoke the fire and get cosy with a new mystery or a killer thriller.

I just finished The Unseeing by London-based Anna Mazzola, an elegantly written historical mystery in the vein of Atwood’s Alias Grace. I don’t think it’s out in North America yet, but I highly recommend when it is. I’m currently approaching the third act of With Malice, a blisteringly-fast read by Canadian writer Eileen Cook, with echoes of the Amanda Knox story. Next up in my line of spines: Edgar Allan Poe and the London Monster by Karen Lee Street, which looks to me like a perfect fall read. I’ll let you know how it goes.

In the meantime, I thought I’d share my all-time favourite Top 5 Chilling Reads to usher in the cooler weather reading season.

#1: Miss Smilla’s Feeling for Snow by Peter Høeg (Smilla’s Sense of Snow in the U.S./Can)

There had to be at least one Nordic noir on the list, right? I love this story about Smilla, a young woman in Copenhagen who becomes involved in the investigation of the death of her neighbour, Isaiah, a child who lived in her building. Smilla is originally from Greenland and is a trained glaciologist, and therefore knows a lot about snow. By looking at the footsteps on the roof of her apartment building, she understands that Isaiah was running away from something, or someone, when he fell from the roof. In short: it wasn’t a suicide, despite what the police might say and the absence of other footprints. I love how moody and evocative Hoeg’s writing is, and the tension between the characters — that sense of hidden turbulence beneath surface conversations, like water under ice.

This Giller-prize winning novel tells the fictionalized true story of Grace Marks, the 16-year-old servant accused of killing her employer and his housekeeper in Toronto, 1854. The story alternates between Marks’ perspective and that of Dr. Simon Jordan, the physician asked to determine her state of mind, as well as her guilt or innocence. Atwood is a master of shifting perspectives and voices, and I am inspired by her careful layering of character in this work. Marks haunts you long after you’ve stopped reading.

#3: The Luminaries by Eleanor Catton

This sparkling tale won the Man Booker Prize in 2013. The novel takes place in a small, gold-rush town in New Zealand in 1866, and has been described as “Dickens meets Deadwood”. At the outset of the story, a young fortune seeker called Walter Moody unwittingly stumbles into a clandestine meeting in a bar, where locals are trying to solve a series of crimes, including the disappearance of the town’s wealthiest miner. Each character contributes a piece of the story while Moody is tasked with the job of fitting the sections together to make sense of the whole. The trouble is, each character is keeping secrets, holding back parts of the tale. I love the hushed tone of the opening that begins in whispers and steadily builds into the crescendo of loud accusations at the conclusion. Although this novel was 832 pages in length, I felt myself sucked in with Walter Moody and barely noticed the time pass. Others have described how Catton structured the characters as planets rotating in a carefully plotted universe, but for me, I came away with the sense that I had stumbled into the calm eye of a storm and had then been caught up in a tornado of storytelling, spinning along with the other characters. I loved the cold, rain-soaked locale and the prevailing atmosphere of suspicion.

#4: The Dinosaur Feather by S.J.Gazan

Yet another great Nordic noir – this one winning the Danish Crime Novel of the Decade. The story follows the plight of PhD student Anna Bella Nor as she learns that her academic supervisor, Dr. Lars Helland, has been murdered – just before she has to defend her PhD thesis. To make matters worse, a copy of Nor’s thesis was discovered on Helland’s lap when the body was found, drawing the attention of Police Superintendent Soren Marhauge. I love that the noir setting for this story is the dark, twisted labyrinths of academia and the shadowy hallways of the “ivory tower”. Gazan’s artfully constructed characters are both vulnerable and lost, and so terribly self-absorbed that they are barely able to acknowledge one another as human beings. Then there’s the wonderful conflict between scientific process and human emotion

*A word of warning, however: I was completely unable to bring myself to eat meat for a long time after reading this book. Perhaps not ideal for Thanksgiving. Still worth it, though – a pleasingly spooky fall read.

#5: The Little Friend by Donna Tartt

I know that, when it comes to Donna Tartt, most people are all about The Goldfinch and The Secret History, which I also love, but my Tartt favourite is still The Little Friend. Set in the American south, a young girl, Harriet Cleve Dufresnes, sets out to solve the murder of her brother, Robin, who was found hanging in a tree in the backyard of the family’s home ten years earlier, on Mother’s Day. Tartt hooks the reader with her atmospheric opening: you can almost feel the static electricity of the coming storm as poor Robin skips down the steps in flashback to meet his doom. Harriet’s vivid flashes of memory feel like lightning illuminating pieces of an impossible puzzle for the reader, as Harriet sets out to impose a narrative on the chaotic jumble of her memories. The story is a moody exploration of childhood, but one that is haunted by strains of the nursery rhyme, “Who Killed Cock Robin?” This is a perfect read to curl up with during the coming storms.

So, that’s my five “Big Chills” – but I wish I could have squeezed in a little of Karen Russell’s wickedly absurd Swamplandia (pairs well with a fall paddle around the lake, though it’s more “mysterious” than “mystery”), given a shout out to Michael Chabon’s 40s-nostalgic noir, The Yiddish Policeman’s Union, and served up a slice of Alan Bradley’s outrageously witty mystery, The Sweetness at the Bottom of the Pie, a tasty and autumnal note to end on.

What are you reading this fall?

WHO IS ELLE WILD?

ELLE WILD grew up in a dark, rambling farmhouse in the wilds of Canada where there was nothing to do but read Edgar Allan Poe and watch PBS mysteries. She is an award-winning short filmmaker and the former writer/host of the radio program Wide Awake on CBC Radio One. Her short fiction has been published in Ellery Queen Magazine and her articles have appeared in The Toronto Star, Georgia Straight, and Westender. Wild’s debut novel, Strange Things Done, won the Arthur Ellis Award 2015 for Best Unpublished First Crime Novel, and was shortlisted in multiple contests internationally. Recently returned from the U.K., Wild currently resides on an island in the Salish Sea named after the bones of dead whales.

A dark and suspenseful noir thriller, set in the Yukon.

As winter closes in and the roads snow over in Dawson City, Yukon, newly arrived journalist Jo Silver investigates the dubious suicide of a local politician and quickly discovers that not everything in the sleepy tourist town is what it seems. Before long, law enforcement begins treating the death as a possible murder and Jo is the prime suspect.

Strange Things Done is a top-notch thriller — a tense and stylish crime novel that explores the double themes of trust and betrayal.