I had the honour of being interviewed by Kate White, Head of Press, at the Crime Writers’ Association about my experience having BLAZE shortlisted for the Debut Dagger in 2014. Here’s the kickoff to the interview.

If you’re just starting out and haven’t published yet, The Debut Dagger is a great way to garner interest in your novel. Be brave and submit. You just never know where it will lead.

Prepare to be deeply jealous when you find out the circumstances in which Kristina Stanley penned her Debut Dagger shortlisted novel, Blaze. However, despite a deeply glamourous writing story, the Canadian newcomer faced the same struggle as all other would-be authors as she approached getting published. Here Kristina explains how getting on the Debut Dagger shortlist changed everything, and why she thinks it’s a brilliant gateway for writers to get their work noticed.

What made you decide to enter Blaze in for the 2014 Debut Dagger competition?

If you’d like to check out DESCENT or BLAZE the links are below:

Instead of exchanging vows, Kalin Thompson spends her wedding day running from a forest fire near Stone Mountain Resort, and the pregnant friend trapped with her has just gone into labor. Meanwhile, Kalin’s fiancé, Ben Timlin, hangs from the rafters of a burning building, fighting for his life. Can the situation get any hotter?

Life as a writer is often spent behind closed doors working hard, but there are moments when a writer catches a glimpse of hope that her work may actually entered the world of the published.

Margaret Hart and Natalie St. Pierre at the HSW Literary Agency have been working hard behind the scene to help me get my novels published.

Their last post at HSW Literary Agency:News certainly made me smile, so here’s a shout out to say thanks.

Sometimes a girl just has to share her happiness.

Here is what HSW wrote about me:

The life of an author, quietly perfecting her craft, is often anonymous. But the efforts of crime writer Kristina Stanley are at last getting the attention they deserve: Stanley has three works up for separate crime writing awards!

Descent, the first book in Stanley’s Kalin Thompson series, is nominated for the Unhanged Arthur, the Arthur Ellis Award recognizing the year’s most promising piece of unpublished crime fiction. Over in the UK, the Crime Writers’ Association honours book two in the series, Burnt, with a nomination for their Debut Dagger. Finally, just in time for Short Story Month, Stanley’s “When a Friendship Fails” is nominated for the Capital Crime Writers‘ Audrey Jessup Short Story Award.

My human is singing “Debut Dagger Shortlist” and doing the happy dance. Sometimes Kristina looks really silly, but she’s so happy I won’t mention that to her.

I give her my confused look to ask her what’s going on. Seriously, she’s freaking me out.

She makes we wait until I settle down. Then she says, “My novel BURNT has been shortlisted for the Debut Dagger Award.”

“It’s from the Crime Writers’ Association in the UK for unpublished authors.”

I decide I better do the happy dance too.

Then I bring her a present. Who doesn’t like an already chewed stick? 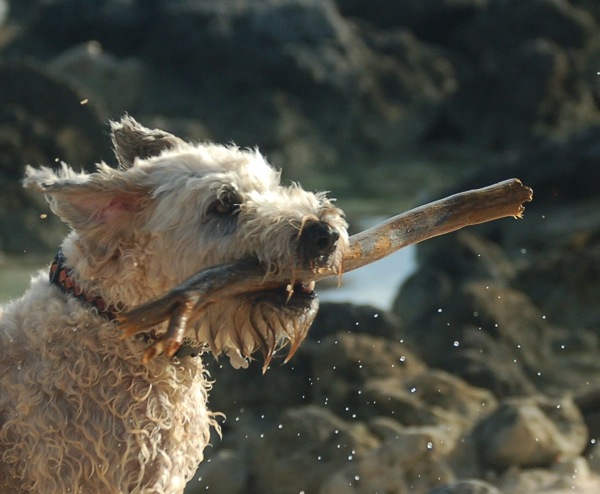