When M.H Callway approached me about hosting Medames of Mayhems on Mystery Mondays, I was thrilled! As a Canadian, showcasing a collection of Canadian mystery authors makes me proud of the writers in our little country.

The newly released Anthology is a must read for mystery lovers. You’ll get exposed to a variety of styles and stories, so why not check it out.

Now over to the Medames…

13 CLAWS BY THE MESDAMES OF MAYHEM 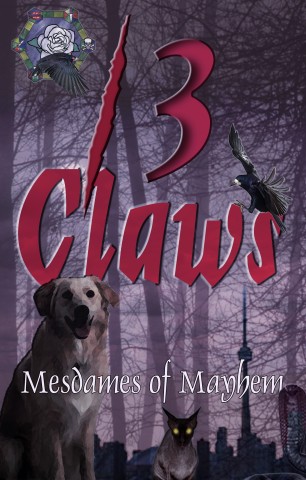 13 Claws is the third anthology by the Mesdames of Mayhem. It’s a collection of 17 crime fiction stories by 15 authors, three of whom are newcomers to the genre.

We are all animal lovers so it’s natural we’d pen tales centred on our non-human friends. Caro Soles rescues dachshunds from puppy mills and Melodie Campbell’s “Frankenpoodle” works as a therapy dog. All of us own – or have owned – a cat or a dog and like Jane Burfield, several of each at the same time. Cheryl Freedman though favours much more exotic pets: ferrets!

Few cozies in our book though. Perhaps it’s the influence of our troubled times, but our writing has taken a decidedly darker turn.

Who are the Mesdames of Mayhem?

We are 15 established Canadian crime fiction authors. Most of us have won or been nominated for major awards like the Arthur Ellis, Edgar, Derringer, Debut Dagger, Bony Pete and Ippy.

Back in 2013, I had the idea that my two literary critique groups should join forces on social media. Donna Carrick designed our website, set up our Facebook and Twitter accounts – and the Mesdames of Mayhem were born.

Our goal is to promote Canadian crime fiction. Many readers here at home don’t realize that their favorite crime writers may be Canadian. And of course, many American readers never hear about Canadian titles.

We work to promote women crime writers and many of us are longstanding members of Sisters in Crime. It might surprise readers that Sisters in Crime has Brother members, men who promote equity for women authors. I’m happy to say that the Mesdames have a Monsieur of Mayhem, Ed Piwowarczyk.

All of us are published short story writers and most of us are novelists. Several of us are also proficient in other forms of fiction: Lisa De Nikolits and Sylvia Warsh are literary authors; Melodie Campbell and Caro Soles have written books in fantasy and speculative fiction; and Rosemary Aubert is a respected poet. Catherine Dunphy is a biographer and she and Madonna Skaff write for young adults.

13 Claws is our third anthology. When we first got together, we thought that an 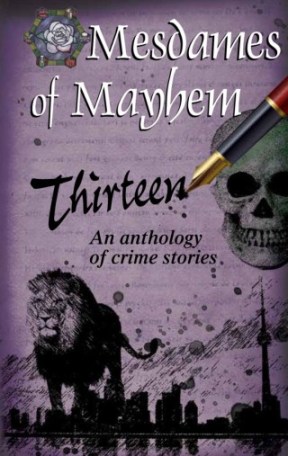 anthology would be a great way readers could get to know the work of many different writers. We do write from comedy to noir. Even better, our readers could go on to read more books and stories by the writers they enjoyed.

To our delight, Thirteen, did really well and the stories by Donna Carrick and Sylvia Warsh were nominated for the Arthur Ellis Short Story award. That encouraged us to issue our second anthology, 13 O’clock with crime stories focused on time. And later, our third collection, 13 Claws.

Why “Thirteen” in the titles?

When we put together our first anthology, 13 of us contributed stories. So I thought: why not simply call our collection Thirteen?

And 13 has proved to be our lucky number! Promoting our anthologies has led to numerous public readings, warm partnerships with our public libraries and community theatres, participation in literary festivals like Word on The Street, radio interviews, you name it – more publicity than we ever anticipated or imagined.

13 Claws features three newcomers? How did that happen?

For 13 Claws, we ran a contest for writers who had never published a crime fiction story. Our winner, Mary Patterson, has a delightful story about a cat detective though she’s actually a dog lover. Our finalist, Roz Place wrote a chilling suspense tale about a disappearance revealed by a cat. And in our other runner-up, Marilyn Kay’s police procedural, a stray cat is at the heart of dark crime.

What do reviewers say about 13 Claws?

Our previous anthologies have been warmly reviewed but we were especially delighted to be singled out by Jack Batten, the crime fiction reviewer at the Toronto Star, who had this to say about 13 Claws:

In one especially clever story by Catherine Dunphy, we get a plot built around boxes of animal crackers.

But just because the contributors to the collection write out of an affection for animals doesn’t mean readers need similar feelings to appreciate the stories. There’s enough suspense and intellectual fascination built into the plots of the majority of stories to satisfy even the most ferociously cynophobic reader. Catherine Astolfo’s story involving a pig offers an intriguing way of giving Paul Bernardo himself a case of the chills. And M. H. Callway’s tale mixes snakes and the real estate business in a way that will make readers run a mile from both.

A great mix of shuddery dark and tongue-in-cheek funny. What devious minds all these nice women have.

I can only recommend it. There’s something here for everyone. The stories, ranging from cozy mysteries to thrillers, feature cats, dogs, dragons and snakes – some of which are quite mischievous. As stated on the Mesdames’ website, the writers all share one mission: to thrill readers with their passion for Crime Fiction. 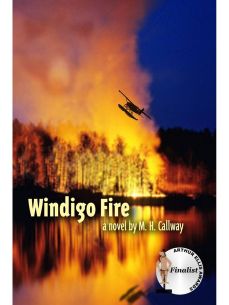 M.H. Callway is the pen name of Madeleine Harris-Callway, the founding member of the Mesdames of Mayhem. Her debut thriller, Windigo Fire, was short-listed for the Arthur Ellis Best First Novel award.

Her award-winning short crime fiction stories and novellas have been published in several anthologies and mystery magazines and are available in the book, Glow Grass and Other Tales.

Where to Find Out More