The Author’s Guide To Selling Books To Non-Bookstores is on sale. You can get it for 50% off through Smashwords. 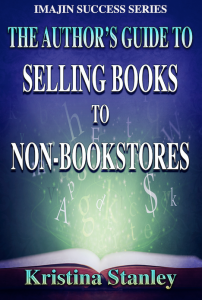 Imagine walking into a grocery store, gift shop or other non-bookstore and seeing YOUR book for sale.  This wonderful experience is within your grasp—if you’re bold enough to pursue it.

Selling to traditional bookstores and making a profit can be extremely difficult, but there is an alternative. In this step-by-step guide, I’ll show YOU how to move beyond the bookstores and sell to other retail outlets. Every step is detailed, from formulating a plan to collecting money.

I sold more books through non-bookstore retail outlets than through traditional bookstores, and YOU can too.

This was my favorite moment with the Author’s Guide…

If you love mystery, suspense, and thrillers check out these bestselling books. Grab ’em now between July 1st and July 15th only! Visit the exclusive book page.

If you haven’t read one of my books, here’s your chance to get them on sale. Just click the book cover. 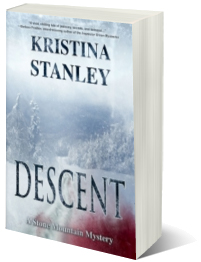 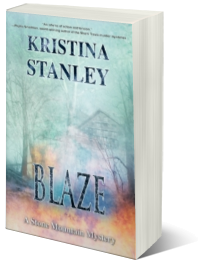 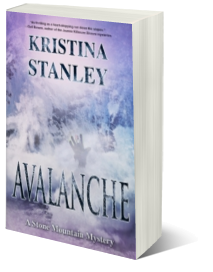 Thanks to Imajin Books, all three Stone Mountain Mysteries are on sale. Why not buy yourself and early Christmas gift. 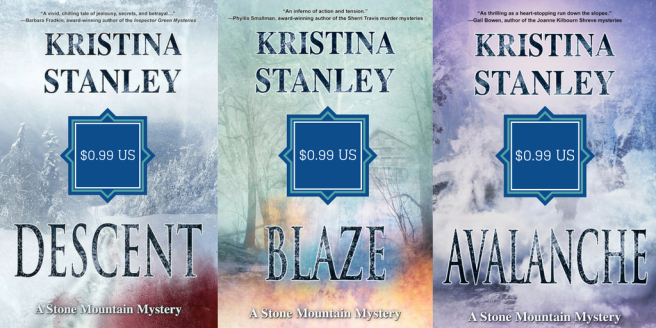 But Imajin Books is even more generous…

The Author’s Guide to Selling Books to Non-Bookstores is also on sale for $0.99 USD. 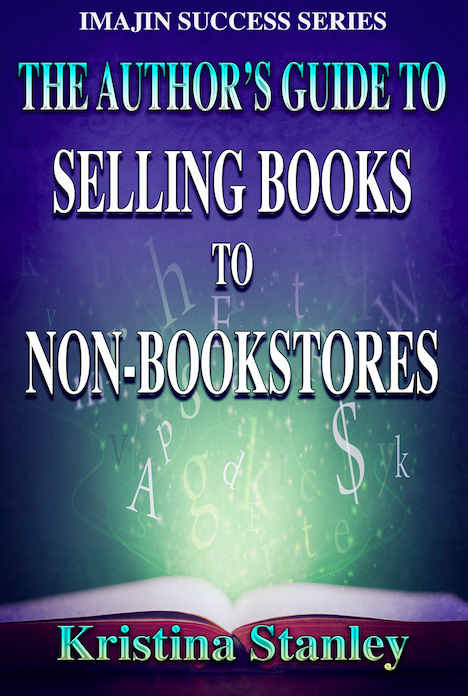 Thanks to Imajin Books for putting DESCENT and BLAZE on sale.  Why not buy yourself a present, curl up, and read.

Just to entice you, here’s a little endorsement for Descent.

In this impressive debut, Kristina Stanley weaves a vivid, chilling tale of jealousy, secrets, and betrayal in a close-knit mountain ski village. Like its likeable young heroine, Kalin Thompson, DESCENT is both tender and tough.” – Barbara Fradkin: author of the Inspector Green Mysteries and two-time winner of the Arthur Ellis Award for Best Novel. 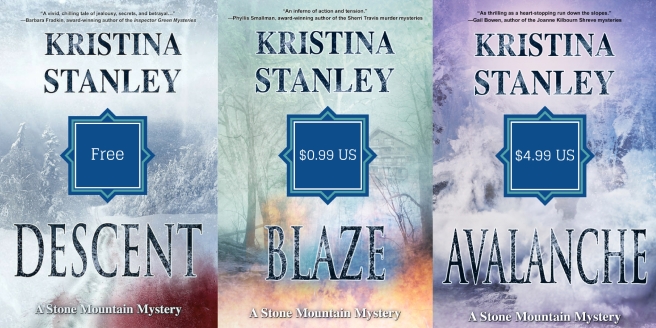 DESCENT shortlisted for the 2014 Arthur Ellis Unhanged Arthur for excellence in crime writing.

Kalin’s boss orders her to investigate. Her boyfriend wants her to stay safe and let the cops do their job. Torn between loyalty to friends and professional duty, Kalin must look within her isolated community to unearth the killer’s identity.

Instead of exchanging vows, Kalin Thompson spends her wedding day running from a forest fire near Stone Mountain Resort, and the pregnant friend trapped with her has just gone into labor. Meanwhile, Kalin’s fiancé, Ben Timlin, hangs from the rafters of a burning building, fighting for his life. Can the situation get any hotter?

When the fire is declared as arson, finding the firebug responsible becomes Kalin’s personal mission. In the course of her investigation as Director of Security, she discovers that some people will go to extreme measures to keep her from exposing their secrets.

Thanks to all my readers who have bought and read the books in the Stone Mountain Series. It’s a wonderful feeling to know others have read my stories.

TODAY IS THE FINAL DAY OF IMAJIN BOOKS SALE:

This week my publisher, Imajin Books, has put four great books up for free on Kindle, including A HUMAN ELEMENT! Like mystery, romance and thrills? Then check them all out and load up on reading! ENDS TODAY. 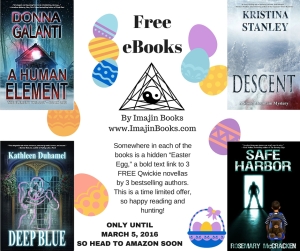 PLUS, for a limited time somewhere in each of these books is a hidden “Easter Egg,” a link to 3 FREE novellas by 3 bestselling authors. Happy reading and hunting!

If you haven’t had a chance to read A HUMAN ELEMENT grab this now while you can…..

Too read the rest… DONNA GALANTI

Happy New Year. We start our year at -25 degrees Celsius, which calls for more hiding by the fireplace. Even Farley wants to stay cozy at home.

We’ll wait until the sun comes over the peaks before heading out for a walk in the snow. Farley will wear booties to keep his paws from freezing.

Imajin Books are still on sale. Now is your chance to grab a copy of DESCENT at 0.99 USD and BLAZE at 1.99 USD. The sale ends soon. 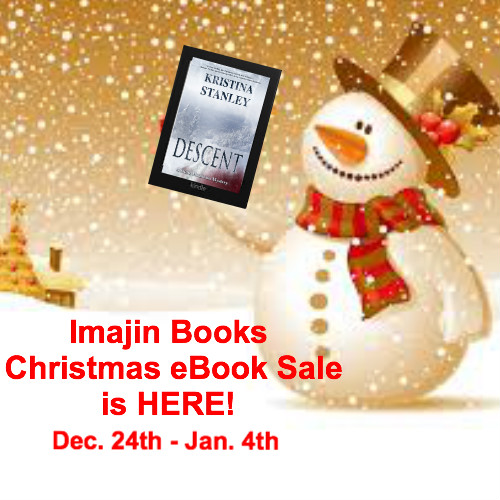 Imajin Books has their books on sale until January 4th, 2016. 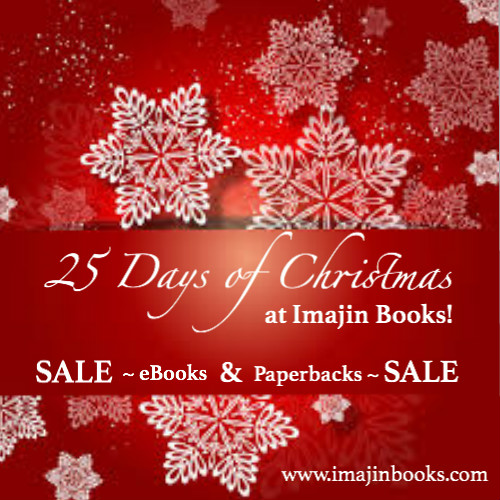 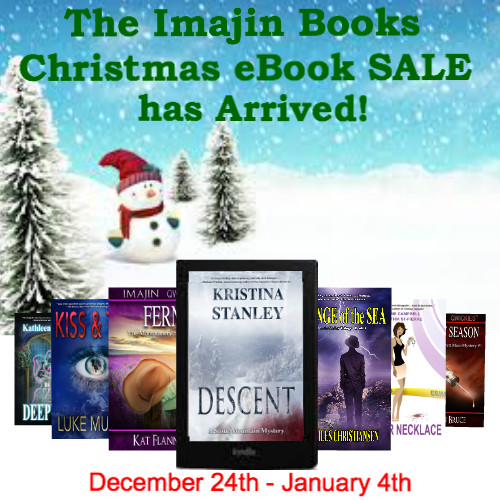 To celebrate the season, Imajin Books has put their titles on sale.  Frosty the Snowperson – she looks like a woman below – has a few suggestions for what to read.

DESCENT, A Stone Mountain Mystery #1, is on sale for 0.99 USD on Amazon.com (or equivalent in amazon.ca in Canadian dollars). 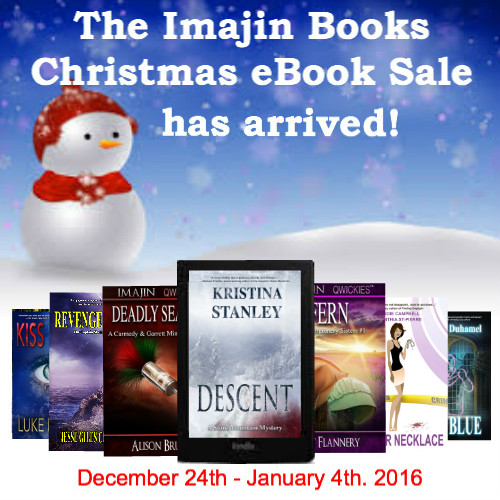 Did Santa fall asleep on the job and not give you the book you wanted? The Imajin Books sale is still going strong.

To celebrate the holiday season, DESCENT is on sale for 0.99 USD on Amazon.com (or equivalent in amazon.ca in Canadian dollars). 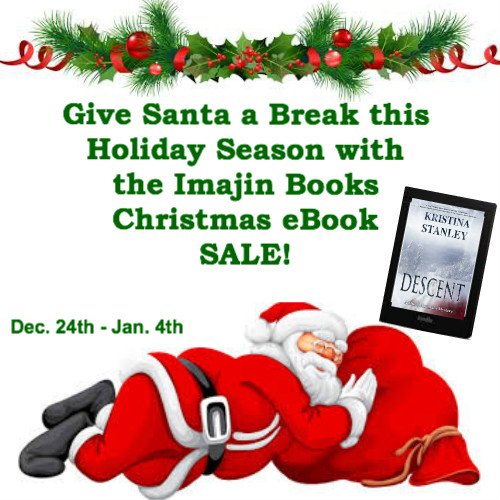 Didn’t get the book you wanted for Christmas? You can always treat yourself to an eBook from Imajin Books.

DESCENT is on sale for 0.99 USD on Amazon.com (or equivalent in amazon.ca in Canadian dollars).

Have a wonderful day today!