Get ready to be frightened. Today on Mystery Mondays Donna Galanti shares her monsters. In her own words here is what Donna has to say.

In some movies and books the monsters are obvious. But are the monsters inside us? In the first two books of my paranormal suspense Element Trilogy, A Human Element and A Hidden Element, I write about monstrous characters.

In A Human Element, X-10 appears to be the obvious monster. He is deformed. He kills. He seeks blood and revenge. He has no remorse. Yet as we come to discover it’s a combination of his genes and environment – the line between monster and victim begins to blur.

I am drawn to writing stories that feature the monsters inside us; the things we fear, battle, and seek escape from. Sometimes we need to face them to conquer them. I even faced them in my own real nightmares once and survived, which could be why I write about them.

And sometimes we create the very monsters we fear who are really to be pitied, like Mary Shelley’s Frankenstein. We can identify with him as we have all felt like an outcast, rejected and unloved at times. Is he truly the monster or is it the human who created him?

X-10 in A Human Element can be seen as a monster in the book. Yet, while his genes and environment have made him what he is, should he be feared or pitied? Or both? You can meet him here.

I believe the true monsters in A Human Element lie beneath the surface of characters that are not so obviously monstrous on the outside.

I created a new kind of monster in book 2, A Hidden Element, with Adrian. He is menacing and evil and to be feared, but pitied too. In the book we begin with Caleb, the son of Adrian, forced against his will by his father to a new land. We watch, through his eyes, as his father wields his evil power over innocent folk and how Caleb vows to never become like him – a monster.

I am compelled to write about light and dark residing side by side. To me, writing is all about passion – feeling the good and feeling the bad. And I want to feel it all. To explore the twin sides of our human nature: the good inside us, the dark inside us – one book at a time.

Excerpt of X-10 “the monster” from A Human Element:

As X-10 ran under the full moon, leaping over rocks and roots, darting around boulders he could see her in his mind.

Laura. You are mine.

Then he saw her with her man. Water coursed all around them. Her hair hung wet about her shoulders. X-10 closed off his mind’s eye to the scene. It made him feel strange. And in that strange feeling he couldn’t define, X-10 hated her even more.

Rage surged through him and his blood pulsed fast, throbbing under his white skin in blue rivers. Why did she get to have her man when he couldn’t have his woman? Why was she worthy and he wasn’t? But Sabrina’s touches had made him feel worthy. Even if they were paid. And she had smelled and looked so good.

The night flashed through him again and he moaned with agony over the loss of the girl who left a hole in his heart. The girl who called him Charlie and loved him for just one night.

After Sabrina’s fear of him had left her, she’d sat down on his bed then. “Why don’t we just lie here for now? We can talk, you know. Like real…people.”

He stood over her, considering. What would he talk about with a human girl?

She lay down on her side and he did too, facing her. Her blonde hair curved along her breasts like silky strands of sparkly cotton candy. He’d seen a picture of it once being swirled on a stick at a fair. He wondered what it would taste like. What she would taste like.

She touched his face then pulled her fingers away. “When you look at all your parts, you’re not so bad.”

“No. I’ve been with monsters.”

She shook her head. “Monsters on the inside.”

Even in the garish light she was the loveliest thing he had ever seen. He wanted to touch her, but was afraid of his urges. To hurt and maim and kill. Good guys don’t do those things. And she had called him by his name. As if he was a good guy.

He was evil to the core.

And hate spurred him on now. Hate would help him survive. He forced himself to run faster through the night. Why did Laura get to live a normal life? He vowed to make her end not normal. And in that end, she would wish she had never been born.

A lonesome dog bayed in the hills above X-10 as if approving his plan. Streaks of moonlight and shadows fell across his face like whip lashes over and over, creating a living painting from darkness and light. He would show Laura darkness like she never experienced, and pain. There would be so much pain. He howled back at the creature that rode alone through the woods as he did. Perhaps they would meet along their journeys.

He hoped so. He was getting hungry again.

Who are some of your favorite monsters? And did they get what they deserved in the end or were they to be pitied and redeemed? 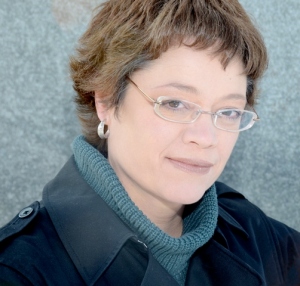 Donna Galanti is the author of A Human Element and A Hidden Element (Imajin Books), the first two award-winning, bestselling books in the paranormal suspense Element Trilogy, and the middle grade fantasy adventure series Joshua and The Lightning Road (Month9Books). Donna is a contributing editor to International Thriller Writers the Big Thrill magazine and blogs at Project Mayhem. She lives in Pennsylvania with her family in an old farmhouse. Visit her at www.ElementTrilogy.com and www.DonnaGalanti.com.

7 thoughts on “MYSTERY MONDAYS: The Monster Inside Us by Donna Galanti”