How to Write Mob Comedies in your own Home Town, and not get Taken Out by the Family

It all closed in on me at the launch of THE GODDAUGHTER mob caper in Hamilton. Eighty-five people stood waiting.

The local television station had cameras in my face.  So far, it had been an easy interview focused on my awards and comedy career. The fellow was charming.  I liked him a lot.  Then he dropped the bomb.

“So…have you ever met a member of the mob?”

“Yes.” I said, very precisely. So precisely, that everyone in the room laughed nervously. “In fact, I had to wait until certain members of my family died before getting this book published. ‘Nuf said.”

The ‘nuf said’ was the closure.  He got it.  Being a smart lad, he even let it drop.

Because frankly, I was speaking the truth.  I did wait until certain people died.  Some of them were in Sicily, but more were in Canada.  Some even died from natural causes.  (“He died cleaning his rifle” was an unfortunate family expression, meaning something entirely different, if you get my drift.)

This made me think about how close you want to get in a book to real life.

As writers, we research a hell of a lot.  Of course, I did research for The Goddaughter series.  Some of the study was pretty close to home, as I riffed on memories from my childhood.

My first memory is of a family reunion at a remote farmhouse in Southern Ontario. I was about three, and tears were streaming down my face.  Big scary uncles picked me up. They tried to console me by speaking softly. But I couldn’t understand them because they were speaking in Italian, or more precisely, Sicilian.

Those were the days of Brio and cannoli after mass on Sunday mornings.   And gossip about other relatives, one of whom was a famous boxer.  My aunt’s friend, the singer (one of a trio of sisters) who could not escape the clutches of a mob underboss in the States; he wouldn’t let her go.  I remember the aunts clamming up about this, when I ventured into the room looking for Mom.

I was a darling of the family, with dark curly hair and big evergreen eyes. Later, when I grew up curvy and was tall enough to model, they doted on me. So my memories of growing up in such a family are decidedly warped.

They were warm and loving.  Very witty.  Loads of fun.  And massively protective. 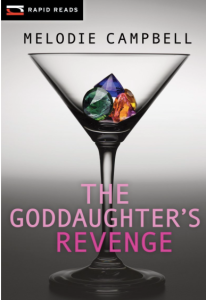 In the screwball comedy THE GODDAUGHTER REVENGE, you will find a mob family that is funny and rather delightful.  Gina loves them, but hates the business.  She is always trying to put it behind her, and somehow gets sucked back in to bail them out.  I wanted to show that ambivalence.  You are supposed to love your family and support them.  But what if your family is this one?

THE GODDAUGHTER series is meant to be laugh-out-loud funny.  But there is an adage that states: Comedy is tragedy barely averted.

No kidding.  I’ve been writing comedy all my adult life.

The Toronto Sun called her Canada’s “Queen of Comedy.”  Library Journal compared her to Janet Evanovich.  Melodie Campbell got her start writing standup. She has won nine awards for fiction, including the 2014 Derringer and the 2014 Arthur Ellis (Canada) for The Goddaughter’s Revenge.

When I was a girl, my favorite movie was The Pink Panther.

Great-uncle Franco owned a movie theatre in town. He had a knock-off reel. We’d beg him to play that film on the big screen. I probably saw it thirty times. It became an obsession with me.

When other girls dressed up for Halloween as Princesses, I was decked out in head-to-toe black. With a mask.

“Girls can’t be cat-burglars,” my cousin Paulo told me.

“She’s not real,” Paulo sneered. “She’s just a legend, like Santa Claus. Only boys are burglars.”

This obviously did some serious damage. Because of course, I had to prove him wrong. Even if it took me twenty years to do it.

Next week on Mystery Mondays we have the pleasure of welcoming Judy Penz Sheluk, author of HANGED MAN’S NOOSE.

16 thoughts on “Mystery Mondays: Melodie Campbell on How to Write Mob Comedies”