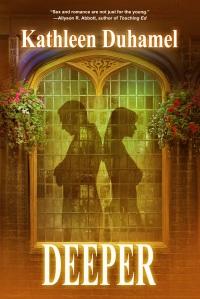 Kathleen Duhamel and I have a special connection. We both signed with Imajin Books for the publication of our first novels last summer.

Kathleen’s second book, DEEPER, is set to be released this spring. Her first book, DEEP BLUE, explores the theme Love Is the Most Addictive Drug of All.

Read to the end and you’ll find a surprise for Kathleen’s launch party.

So let’s hear what Kathleen has to say about romance…

I’m a contemporary romance writer, author of Deep Blue and Deeper (Books One and Two in the Deep Blue Trilogy) so what am I doing on Monday Mystery? The truth is my books aren’t conventional romances. When I began developing Deep Blue, I deliberately set out to write a love story that wasn’t typical in any way (except my characters do have mind-blowing sex). I wanted to weave a tale that combined romance with suspenseful elements, a book that read more like a thriller than a Harlequin novel. You’ll have to judge for yourself whether I’ve succeeded.

When we’re first introduced to Claire Martin, she’s a 58-year-old struggling landscape painter and cancer-survivor who’s all but given up on finding love again at her age. She’s also fiercely independent. After she meets Robert Silver and gets swept up into his overblown celebrity life, she refuses his gifts of a new car and money to pay off her debt to a loathesome ex-husband, because she doesn’t want to be pegged as a gold-digger. It was crucial to the book’s plot and her character that Claire find a solution to her problems without having to be rescued by a man. (Although Rob was more than willing to be her rescuer.)

Similarly, her BFF and single mother Denise Hrivnak searches for a way to plan her financial future, with or without a boyfriend in the picture. In her mind, having a man in her life is a luxury, not a necessity. She will find a way to make her dream a reality, maybe at the expense of having a personal life.

In many of the romance novels I’ve read, the alpha male is an arrogant, sometimes cruel jerk who is ultimately redeemed by the love of a good woman. I’m not saying this could never happen, but it’s highly unlikely in reality. In Deep Blue, Rob is a rock star idolized by millions of fans, but he’s also a 62-year-old lonely soul, still grieving the death of his wife three years earlier. He has issues (panic attacks, stage fright and a history of substance abuse), yet he never bullies or disrespects Claire because he genuinely loves her, and he’s a lot more needy than he lets on. By the end of Book One, Claire has rescued him.

No one gets to be 50 or 60 years old without accumulating some emotional baggage that affects every aspect of life, and my characters all reflect this idea. I’ve already mentioned Rob’s various problems, including his ongoing struggle with sobriety. His musical partner, Artie Hoffman, has his own set of issues. He’s an impoverished foster child turned millionaire rock guitarist, lauded as a genius, with a train wreck relationship history. Artie hides his softer side under a cloak of sarcasm so he never has to let anyone get too close. Fame has made him distrustful of almost everyone.

Even though they’re older, these characters retain their youthful personalities. Claire says she’s still surprised to look in her mirror and see someone old enough to be a grandmother, when she feels so young.

Inside, we all remain the best younger version of ourselves, despite our outward appearance. And our desire for love, sex and companionship does not diminish. As Rob tells Claire, “We can’t help getting older, but we don’t have to get old.”

Deeper (Book Two of the Deep Blue Trilogy) picks up where Deep Blue left off, but it also works a stand-alone novel. The band Deep Blue plans its future, while Claire and Rob’s relationship is rocked by an unexpected development that threatens to rip his family apart. Meanwhile, Denise and Artie embark on a somewhat humorous, prickly relationship of their own. Deeper probes into the psychology of these characters while combining elements of suspense, drama and hot romance.

Pre-orders are available now on Amazon, and the book comes out March 20. I’m having a book launch party on Facebook, March 20, 7 p.m. to 9 p.m. Eastern Time. You can find me on Facebook. Message me or email me at kathleenduhamel@gmail.com if you’d like to attend. My friend Kristina will be giving away a copy of Blaze! (Surprise 🙂 )

Kathleen Duhamel wrote and illustrated her first short story at the age of eight, and has never stopped writing. Her love of the written word continued throughout her varied career as a newspaper journalist and editor, public relations executive, freelance travel writer and owner/operator of two small businesses. A native of Texas, she spent most of her adult life in Colorado before relocating to Virginia in 2014, where she lives with her husband, a standard poodle and a geriatric cat. She is a lifelong devotee of rock and soul music, contemporary art and pop culture. https://kathleenduhamel.wordpress.com/

2 thoughts on “Mystery Mondays: Kathleen Duhamel with An Unconventional Approach to Romance”