I don’t want you to feel sorry for me, but I hurt my shoulder this week, and I used  gestures to let Kristina know I had a boo boo. The only problem with my gestures is I made her sad instead of making myself feel better. Sometimes I wish I could talk.

Kristina loves to interpret my gestures, and she always errs on the soft side. Sometimes I’ll be bad, and she’ll read something positive into it. I chewed Matt’s sock this week, and Kristina said it was because I was hurt and wasn’t getting enough exercise. How cute.

What she doesn’t  know is Matt waits until she’s not around,  his eyes twinkle – that’s his gesture for we’re about to be mischievous but don’t tell Kristina – and he runs to the sock drawer. Yup you heard me. There’s a magic place called the sock drawer. Matt rolls his sock into a ball and throws it at me, repeatedly. He thinks it’s  funny when I play with his sock. I chewed the sock because ripping material with my teeth is satisfying. My behaviour has nothing to do with lack of exercise, but just in case you’re worried, I know not to chew Kristina’s socks.

So back to my injury. I was playing with my friend Beans, and I don’t know what happened. One minute all was fine. We were rolling around in the mud at the base of the ski lift station, and the next minute, sharp pain drove through my shoulder.

At first I pretended nothing happened, but half way home, I had to admit to the pain and I started to limp.

Kristina and Matt slowed down for me. We were almost to the house when I remembered a gesture that gets her every time. I sat and raised my paw. This is my universal signal for something is wrong with me.

My softie of a human turned around, came back for me and then . . . She picked me up and carried me home. I weigh 42 pounds and am a bit awkward to carry, but she didn’t care. I could feel her heart pumping against me. She was worried. I didn’t mean to make her worry, I just wanted a ride home.

When we got home, I curled up on her lap and cuddled her. Her heart rate lowered, and she began to relax. I was trying to tell her I was okay and she shouldn’t worry. But she’s a human. Worry seems to come naturally to them. 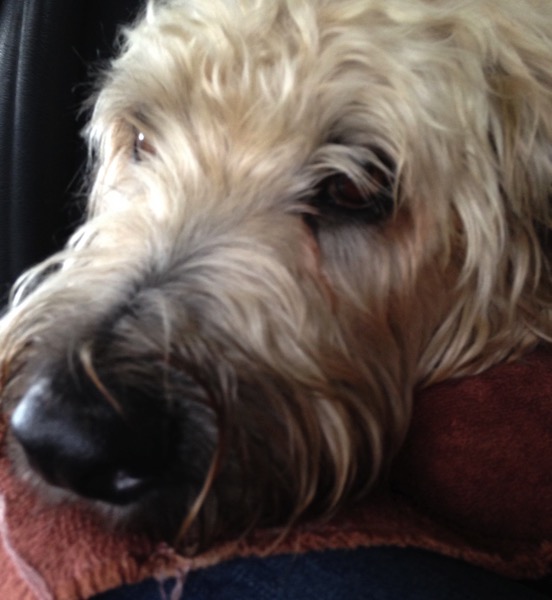 Later, just to make sure she’s okay, I’ll sleep in bed with her.