I’m terrified. A vat of boiling water sits in my back yard. Right outside the backdoor. After a snowfall, this thing looks harmless, scenic even. But’s it’s a dangerous place. 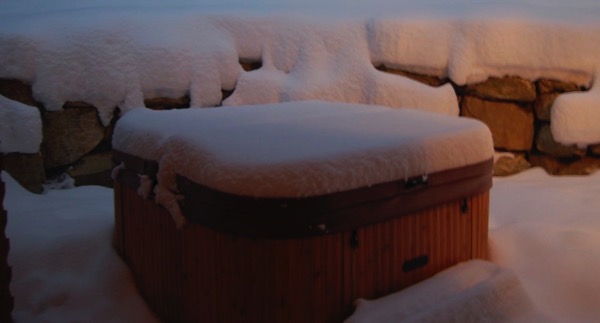 Once the snow stops, my humans do something really dumb. They shovel the snow off the lid. They have a ritual. Kristina puts towels near the back door.

I start to whine.

The crazy humans ignore my warning and walk across the snow in their bare feet. They don’t have fur like I do. This can’t be good for them. Now you won’t believe the next part. They actually get in the boiling water. Who get’s in boiling water, I ask you.

But does that mean no barking or no, I’m not getting out? Things get worse. Kristina and Matt both have a useless sense of smell. I’m not sure they smell anything. My house backs onto a forest. In the evening, wildlife are active. I can smell a bear, cougar, or a moose even if I can see the creatures.

I run to the back off the hot tub, lifting my front paws off the ground, and sniff wildly. “There is a bear on the ridge,” I bark.

“I wonder what he smells?” Matt asks.

“Should we get out?” Kristina asks.

I give up. I run to the front of the house. lie down, put my paws over my eyes and hide. The bear scent is ebbing, so I know it’s walking away from us. We’re safe. This time. But how do I keep my peeps out of the hot tub?