My honour this week is to host author Gloria Ferris. As an award winning author, Gloria has valued advice that she’s sharing with us today. But first, a bit about her books. 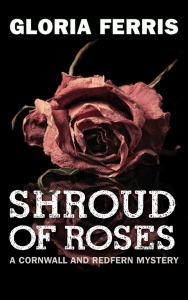 SHROUD OF ROSES: The Class of 2000 left behind a skeleton in its closet, and fifteen years later someone is coming for the rest of the graduates, including none other than Bliss Moonbeam Cornwall. Against their better judgment, Cornwall and Redfern team up to expose the killer before time — or Cornwall’s talent for stumbling into danger — gets the best of them.

HOT OFF THE PRESS (I’ve always wanted to say that):

is available for pre-order now.

What could be better than a week of sipping mojitos, basking in the sun, and listening to waves lap against a Caribbean beach? Nothing, according to Jordan Blair and her friend, Ellie Cassidy. Until their vacation takes a sinister turn…

5 Tips for Writing a Mystery Series by Gloria Ferris

Every author who writes a series will have found her own truths and tips on what works for her storylines and characters (right, Kristina?). I don’t pretend that my list is comprehensive or will apply to everyone. But, they work for me and might help another writer just getting started on a series.

If you’ve planned a series, little secrets and heretofore unmentioned family members can be introduced when you need them. I plan to bring a badass gramma into book 4 of the Cornwall & Redfern series. So far, Gram hasn’t been mentioned and doesn’t need to be.

Even murder. What are chances that a young woman in a small town will run across a homicide or other serious crime more than once? Slim to fat, but this is fiction. Readers suspend reality to enjoy the story. When they pick up a sequel, they expect mayhem to rampage through the pages, just like book 1. How many of us think when we pick up the latest episode of our favourite series, Oh no! Another murder? More crime and mystery! Not again!

Me neither. So, throw in another homicide or bank robbery and let ‘er rip.

Watching the mating dance of your favourite cop or sleuth is exciting. It should be incidental to the plotline, a slow blossoming of character development that can be nurtured over the course of several books. But, come on! After book 23 in the series, if our heroine is grappling with relationship issues with the same boyfriend she’s had for 15 years, or still can’t decide between Carlos and Brad, I’m losing interest and even an intriguing mystery won’t pull me back. Move on and show conflict with another character.

Some authors kill off their supporting cast with nary a smidge of regret. How bloodthirsty! And, unnecessary. I love my characters, even the mean, snotty ones with no obvious redeeming qualities. To keep readers from tiring of one of these individuals, I can send him out of town, demote him temporarily to spear bearer, or just mention him in passing. Or not at all. But, he can return for a future episode. When I need suspects or doomed victims, I create them just for that purpose. I don’t mess with my regulars.

A reader should be able to pick up Book 2, or Book 12, in a series and not be lost in time and space. It’s okay for the reader to realize she isn’t reading the first book in a series, but play fair. The ending of each book should resolve the mystery before the next one begins. If you’re writing a serial, state this on the front or back cover.

On a related note, repeat readers will not be offended by brief reminders of the setting and descriptions of the returning characters. This information will firmly anchor new readers in the world you have created for them.

Thanks for having me as your guest, Kristina. I’m honoured to take part in Mystery Monday!

Gloria Ferris is the author of the darkly humorous Cornwall & Redfern Mysteries. The first in the series, Corpse Flower, won the Crime Writers of Canada Unhanged Arthur Award. The second, Shroud of Roses, was released in July, 2015. Her first paranormal mystery novel, Cheat the Hangman, won the 2012 Bony Blithe Award. Gloria’s mystery suspense novella, Targeted, co-authored with Donna Warner, will be released on November 21st. Targeted takes place in Roatan, Honduras and was planned as the first in a series. The next episode will follow cop/PI duo, Blair and Piermont, as they solve a murder in Old Quebec City.

Gloria began her writing career as a technical procedure writer at a nuclear power plant on Lake Huron’s rocky shores. It was an exciting job, but opportunities for plot and character development were limited. So she turned to crime fiction and found it to be a lot more fun. Now, she has returned to her roots in southwestern Ontario to work on both series, and to dream of finishing the sequel to Cheat the Hangman.