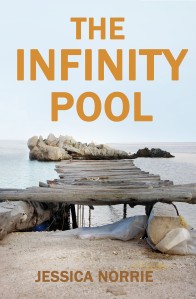 Mystery Mondays has been a fascinating experience for me. This week, our guest is Jessica Norrie, author of THE INFINITY POOL. I met Jessica through other author’s I’ve met on line, and now I have another book to read that I might not have heard about.

THE INFINITY POOL is Jessica’s debut novel. So let’s give Jessica a warm welcome.

Here is what she has to share with us.

“Your friends should know they’re fair game if you’re a writer.” By Jessica Norrie

So says a more established writer friend, with plays on the West End stage and on exam syllabuses, who runs workshops and appears on BBC culture programmes. I haven’t yet heard her comments on “The Infinity Pool”, which means she may not have recognised the at best quirky and at worst nasty detail that I shamelessly plucked from my first encounter with her. I hope that what seemed funny at the time, and has been commented on by many readers, will not spoil a friendship.

No such problem with the yoga teacher in my novel, “The Infinity Pool”. He’s everything a yoga teacher should be, wise, relaxed, humorous, fit and athletic, sympathetic, adaptable to different levels, sensible, stable, demanding to the point of stimulus but not stress, in command but without notions of hierarchy. Michael Stewart, who appears as Satnam in the book, I salute you! And anyone looking for a yoga teacher (although he gets around, last heard of in Mexico) should Google him. I thought I couldn’t have given a better testimonial – but then someone said he was “creepy”.

It’s surprising how far back one can go in selecting people on whom to model characters. Aged eighteen, I was in a class with two ravishing girls of Greek Cypriot origin, best friends who turned heads everywhere, but who, though attractively and sexily dressed, were always correct and traditional in their behaviour. I hardly knew these girls; they were pleasant but we moved in different circles and I was too in awe of their perfect looks to approach them much. One of them became Maria in the book, and yet I’m sure I hadn’t thought of her for thirty years until she turned up in my story.

Few people are all good or bad, in life or in good fiction. Ruby, Bernard, Megan and Chris are all composites of people I’ve known. I should apologise to “Ruby” for giving her an unattractive drink problem as well as generosity of spirit and an intriguing wardrobe; in the spirit of remorse I did try and redeem her. Bernard has origins in a man I once dated for a short while: grumpy, and superior but highly intelligent and actually quite warm and vulnerable under a pompous exterior. It’s quite fun to improve such characters as you go along, teaching them and yourself a lesson in the process.

I’m told I write a good location and the setting is of course itself a character. And this one IS a composite –loosely based on a place I holidayed in but with details changed and huge liberties taken. As soon as I arrived, I thought, what a great setting for a whodunit. But if it was really as poorly run, as ramshackle, as un health and safety conscious, as turbulent as I paint it, there would have been no story and they would not still be running highly praised “holistic breaks”. I’m keeping mum about the exact location, although anyone who’s been there will recognise it straight away. That’s just another small mystery for the other readers to solve.

“Adrian Hartman is the charismatic director of the Serendipity holiday community, set among pine trees on a sun-baked island. His job is to ensure the perfect mindful break, with personal growth and inner peace guaranteed. His guests return year after year to bare their souls. For some, Adrian IS Serendipity.

But this year Adrian isn’t there, and nobody knows the reason why. Things have changed: staff and guests are bewildered without their leader and the simmering hostility of the local villagers is beginning to boil over. Is the atmosphere of menace connected with Adrian’s absence? And will life on the island ever be the same again?

As romance turns sour and conflict threatens the stability of both communities, everyone has to find their own way to survive. This evocative novel explores the effect of well-intentioned tourism on a traditional community, and questions the real meaning of getting away from it all.”

Jessica Norrie was born in London and studied French Literature at the University of Sussex and Education at the University of Sheffield. She taught in Paris and Dijon, and in the UK has taught English, French and Spanish to age groups from 5 to 80 in almost every educational setting possible.

She took a break from teaching when her two children were small, to study for and work as a freelance translator. She has also published occasional journalism and collaborated on a Primary French textbook (“Célébrons les Fêtes”, with Jan Lewandowski, Scholastic 2009).

Jessica sings soprano with the Hackney Singers, and wherever else she gets the chance in the UK and abroad. Less publicly, she plays the piano – slow pieces suit her best as she needs lots of time to figure out the chords.

She is fascinated by languages and has worked hard to make language learning approachable and fun even for the most nervous students. But having always read voraciously, she would now prefer to concentrate on writing. “The Infinity Pool” is her first novel, drawing on many years of travel and encounters, and she already has several ideas for another.

Everything you need to know about Jessica you can find out below:

Amazon Canada (no Canadian reviews yet but for rather more go to Amazon.uk, Amazon.com, Audible.uk or for less favourable ones in the land where it sold best (?!) Amazon.au. I would LOVE some reviews in Canada or more in the US where it’s fair to say I haven’t yet made much impression on the market. However the Audible narrator, although Welsh, lives in Canada. In Australia II went to no 1 in Literary Fiction when on promo in September, but unfortunately Amazon classified it as Crime and I think readers were disappointed by the lack of psychopaths and general gore. It’s now been moved to Literary Fiction. If anyone would like to review it please contact me via my Facebook author page or witter Jessica Norrie – author:
https://www.facebook.com/Jessica-Norrie-1617940365158063/?ref=hl or by direct message on Twitter: @jessica_norrie.
Amazon Canada
http://www.amazon.ca/Infinity-Pool-Jessica-Norrie/dp/1514868571/ref=sr_1_1?s=books&ie=UTF8&qid=1457096717&sr=1-1&keywords=The+Infinity+Pool – available as ebook/papaerback/audio/Kindle Unlimited
Amazon.uk
http://www.amazon.co.uk/Infinity-Pool-Jessica-Norrie-ebook/dp/B011RA8QZW/ref=sr_1_2?ie=UTF8&qid=1437043099&sr=8-
Amazon.com
http://www.amazon.com/The-Infinity-Pool-Jessica-Norrie-ebook/dp/B011RA8QZW/ref=cm_cr_pr_product_top?ie=UTF8
Amazon Australia
http://www.amazon.com.au/gp/product/B011RA8QZW?ref_=pd_ybh_1  ebook only I think
Amazon India
http://www.amazon.in/Infinity-Pool-Jessica-Norrie-ebook/dp/B011RA8QZW/ref=sr_1_4?ie=UTF8&qid=1457097963&sr=8-4&keywords=The+Infinity+Pool
Audible.com
http://www.audible.com/search/ref=a_mn_mt_ano_tseft__galileo?advsearchKeywords=The+Infinity+Pool&x=0&y=0
Audible.uk
http://www.audible.co.uk/pd/Crime-Thrillers/The-Infinity-Pool-Audiobook/B01AMDKT7S/ref=a_search_c4_1_1_srTtl?qid=1452884238&sr=1-1

3 thoughts on “Mystery Mondays: Jessica Norrie on Friends in your Novel”