Today, I have the pleasure of welcoming author, Kathleen Burkinshaw to Mystery Mondays. It’s a special week for Kathleen. Her novel, The Last Cherry Blossom, is being released in one week. But don’t worry, you can pre-order it now on amazon. Let’s help her celebrate, by welcoming her in the comments below.

Following the seventieth anniversary of the atomic bombing of Hiroshima, this is a new, very personal story to join Sadako and the Thousand Paper Cranes. 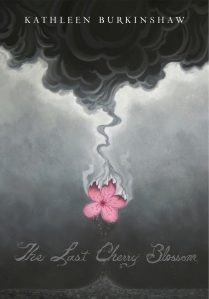 Yuriko was happy growing up in Hiroshima when it was just her and Papa. But her aunt Kimiko and her cousin Genji are living with them now, and the family is only getting bigger with talk of a double marriage! And while things are changing at home, the world beyond their doors is even more unpredictable. World War II is coming to an end, and Japan’s fate is not entirely clear, with any battle losses being hidden from its people. Yuriko is used to the sirens and the air-raid drills, but things start to feel more real when the neighbors who have left to fight stop coming home. When the bomb hits Hiroshima, it’s through Yuriko’s twelve-year-old eyes that we witness the devastation and horror.

This is a story that offers young readers insight into how children lived during the war, while also introducing them to Japanese culture. Based loosely on author Kathleen Burkinshaw’s mother’s firsthand experience surviving the atomic bombing of Hiroshima, The Last Cherry Blossom hopes to warn readers of the immense damage nuclear war can bring, while reminding them that the “enemy” in any war is often not so different from ourselves.

My Personal History Behind The Last Cherry Blossom by Kathleen  Burkinshaw

Growing up I remember an 8 x 10 elegantly framed black and white photo of my mom sitting with her Papa. She was about 4 years old and dressed in a kimono while her Papa was wearing a yukata (casual summer kimono). My mother treasured that picture. It was one of only a handful she had from her childhood. Those photos were also taken when she was about 4. She didn’t have any of her older than that. Other family pictures were all destroyed, along with her home, the day the atomic bomb was dropped on Hiroshima. She only had these few pictures because they were at a cottage they vacationed at in the country. That picture is what inspired me to write about the relationship and love my mom had with/for her Papa.

During my daughter’s elementary school years, I went to her class each year, read a picture book about Japanese culture, and we would do a Japanese craft related to the book I read.

When my daughter was in seventh grade, she told me that her class’ section on WWII would be ending that week, and she overheard some students talking about seeing that ‘cool picture of the mushroom cloud’. She asked me if I could talk about her grandmother and all of the people who were under the now famous mushroom cloud. That question inspired me to present my mother’s experience on August 6th to middle/high school students.

When I was younger, my mother told me what she lost that day in August. But she never gave me any specific details of this event. Her memories were still too painful to discuss.

After my daughter’s request, my mother decided she was ready to tell me more of what had actually happened on the most horrific day of her life. She hoped by sharing her experience, students would realize that the use of nuclear weapons against any country or people, for any reason, is unacceptable.

The following year, my daughter’s previous teacher requested that I present to her history class and to the entire 7th grade at the school. I phoned my mom and asked more questions about her life at home during the war before August 6th. A week later a copy of her favorite picture with her Papa arrived in the mail. That’s when I knew there’s a story here, not just of horror and loss, but of love, and joyful family memories.

My daughter is about to begin her second year of college, and I continue to visit that seventh grade class at her old school. Over the past six years I have added other local middle schools to visit. Each year the students who have heard my non-political presentation, expressed their gratitude to my mother for sharing such a personal, traumatizing memory. Teachers included my presentation in their history curriculum because they felt that the lecture gave students new insight into how children lived during the war. And more importantly, students learned that the Japanese children had the same hopes and fears as the children in the Allied countries.

Teachers, friends, my family, and most importantly my mother encouraged me to finish writing The Last Cherry Blossom. I wanted to write this book not just to honor my mother and her family, but to honor all the people that suffered or died from the effects of pika don. I want readers to know that the victims were all someone’s mother, father, brother, sister, or child.

The Last Cherry Blossom publishes one week after this post! It’s a bittersweet time. My mom passed away in January 2015. However, she did read the latest draft (at that time) of the manuscript and knew it was going to be published. Her elegantly framed, treasured photo now has a prominent place in my home.

Last summer my family visited Hiroshima to honor my mother at the Hiroshima National Peace Memorial Hall for Atomic Bomb Victims. Standing on the same ground where she experienced so much loss and destruction when she was only twelve years old, broke my heart.

My mother lost so much that fateful day, yet she gained an inner strength she never thought possible. Whenever I look at the picture of my mom with her Papa, and when I think of all the love she had given my daughter and myself, I’m reminded that love prevails over fear.

WHO IS Kathleen Burkinshaw?

Kathleen Burkinshaw resides in Charlotte, NC. She’s a wife, mom to a daughter in college (dreading the reality of being an empty nester-most of the time), and owns a dog who is a kitchen ninja.  Kathleen enjoyed a 10+ year career in HealthCare Management unfortunately cut short by the onset of Reflex Sympathetic Dystrophy (RSD). Writing gives her an outlet for her daily struggle with chronic pain. She has carried her mother’s story her whole life and feels privileged to now share it with the world. Writing historical fiction also satisfies her obsessive love of researching anything and everything.

or find her on her website or at other fun sites…