Today on Mystery Monday, we have Jacqueline T. Lynch, author of Cadmium Yellow, Blood Red.  She has also published short stories and non-fiction books. Today we’ll find out a bit about the “Cozy Noir” genre.

The Scene of the Crime: Postwar New England by Jacqueline T. Lynch 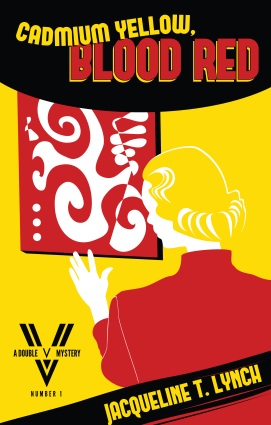 I love “cozy” mysteries and love classic film noir. In combing the two genres for a mystery series, I chose not a sinister Gotham or a fog-shrouded San Francisco, or a sun-bleached and cynical Los Angeles in which to set my characters and stories like those old film noirs. I chose Connecticut in the late 1940s and early 1950s.

I write in a variety of genres: nonfiction history (predominantly New England), classic film criticism, a biography of actress Ann Blyth, as well as novels, and plays.

My Double V Mysteries series protagonists are a young widowed heiress and an ex-con.  They are implicated in crimes in the first book, Cadmium Yellow, Blood Red, and join together to prove their innocence, and in later books become hired sleuths.  I’m currently working on the fifth book in the series, set in a summer playhouse on the Connecticut shore in 1951.  The Double V name comes from their surnames: Juliet Van Allen and Elmer Vartanian.

The books are written in what I suppose I would term “cozy noir.”  Much like 1940s noir films (Humphrey Bogart, Lauren Bacall, etc.), grim crimes and crime-solving situations are presented without strong language or sexual scenes.  There is a bit of humor here and there, but for the most part the couple cautiously navigates the series subplot: a tenuous romance.  They each carry a lot of baggage from their pasts and are wary about becoming too close — but they’ll get there in time.

New England is my home and I am more familiar with this part of the country, but as with many historical novels, the era, I think, is even more important to the tone of the books than the geographical setting. Books enfold us an intimate sense of time travel, but it is perhaps easier for some readers to become lost in the Middle Ages or in the Regency period than in the 1950s, where we must actually be more familiar with the history of that period to immerse ourselves in the story and believe it. We may accept tales of knights and lords and ladies without really knowing much about everyday life in those olden times; but though the middle twentieth century is not as distant; in terms of technology and cultural events it might as well have been a millennium ago.

In the post-World War II years New England found itself at a crossroads. The population was shifting; wartime industry lured thousands to our nineteenth century mill towns, who then left the cities for the new suburban world being carved out of our farmland. In the 1950s, a good deal of that industry began to head south. New interstate highways seemed to aid the exodus, skirting cities, or else piercing through the heart of them. The 1950s saw the heyday of the great downtown department stores in Hartford, Connecticut—the duo’s home base—and summer theatre in the country towns.

Times were changing, and though we reached for the promise of a great future to wipe away the memory of war and Depression, we were also afraid of letting go of the past. Elmer, who had spent the war years in prison and feels guilty for having missed serving in the war, and missed his daughter’s childhood, is baffled by ballpoint pens, frozen orange juice concentrate, supermarkets, and a nuclear age that makes him feel a bit like Rip Van Winkle. Juliet is his guide, and ours, to this strange new world. The fads and even great events of the day: backyard bomb shelters, drive-in movies, and vanquishing polio will have a place in future books in this series—and crimes to be solved around them.

The first book, Cadmium Yellow, Blood Red, is about a museum heist, a missing child, and a murder introducing the recent ex-con and even more recent widow.

In Hartford, Connecticut, 1949, Juliet Van Allen, an administrator at the Wadsworth Atheneum, a prestigious art museum, discovers that her avant-garde artist husband is having an affair with another woman. Juliet’s husband is murdered, and she is the prime suspect. Elmer Vartanian, recently released from prison, is coerced into helping scout the museum for a heist by a gang that has kidnapped his daughter.

Juliet, the rebellious only daughter of a wealthy financier, and Elmer, a lower-class ex-convict who has educated himself in prison, must partner to solve their separate crises, compelled to work together while dogged by the scandal-monger newsman, the shrewd police detective, and scrutinized by the even more judgmental eye of Hartford’s elite in world where Modern Art meets old-fashioned murder.

Who is Jacqueline T. Lynch?

Jacqueline T. Lynch’s novels, short stories, and non-fiction books on New England history and film criticism are available from many online shops as eBooks, audiobooks, and paperback. She is also a playwright whose plays have been produced around the United States and in Europe, and has published articles and short fiction in regional and national publications. She writes Another Old Movie Blog on classic films, and the syndicated column Silver Screen, Golden Years.

4 thoughts on “Mystery Mondays: Jacqueline T. Lynch on The Scene Of The Crime”