How does a Wheaten Terrier cope in a small space with four other dogs? 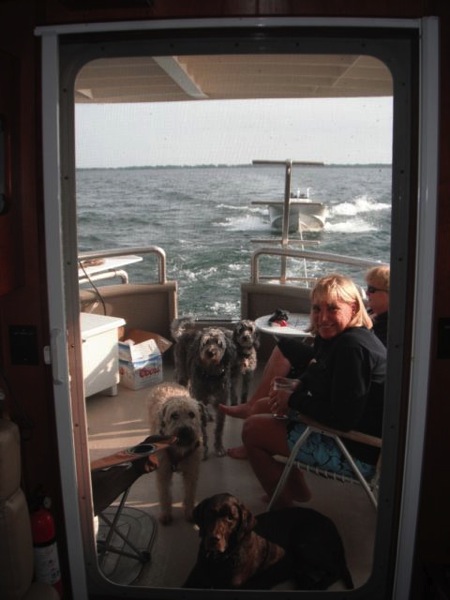 I’m the wheaten in the photo. The dogs with me are a lab/springer mix, and two Australian Shepherd/Poodles mixes. Callie, the Jack Russell is below. She refused to have her photo taken with us because she was too busy napping in the pillows.

So we were on a boat but who invited the thunder storm? Smudge (Lab/Springer) and I don’t like them. The other dogs didn’t care.

Five dogs and only a couple of snapping incidents – not by me because, as you know, I’m perfect. One of the Australian Shepherd’s snapped at Smudge. Smudge, being a lab, just ignored the dog. I hid behind Kristina’s legs. I don’t like conflict. The humans all talked about how to stop aggression in dogs. The conclusion. Someone has to the be the alpha and take control. I didn’t get whether that meant a dog alpha or a human alpha. All I know is I’m not the alpha. It’s all so confusing.

We swam, we ran, we got wet, then we had to stay on the back deck until we were dry. All the human’s got to go inside and warm up. but not us. Oh, except the spoilt one. Callie gets cold, so she got to join in side and bury herself on the couch. And you thought all this time, I was the spoilt one.