Part of the fun of Mystery Mondays is discovering new authors and new books to read. I’ve also discovered it’s a way to learn about how other authors get published. Today, Christina Philippou is here to talk to us about writing mysteries.

Her debut novel, Lost In Static is published by Urbane Publications, and this is their mission: To find the daring, aspirational, and exciting new authors, and bring them to a whole new audience.

That sounded pretty cool to me, so I thought I’d share that in case any of you are looking for way to get published.

Now on to Christina…

Hello and thank you for having me today – I am delighted to be contributing to Mystery Mondays!

My novel, Lost in Static, is a contemporary mystery so, with that in mind, I wanted to talk about writing mysteries into fiction…

Not every mystery relates to something lost, or stolen, or something overt like a secret held by a character (although many of these mysteries do appear in some form or another in my writing). Some mysteries simply relate to what the narrator or, in the case of Lost in Static, narrators know that the reader doesn’t. This may not be the traditional use of mystery in fiction, but it is becoming increasingly common.

But how do you write something that is not a mystery to you, the author, so that it appears like a mystery to the reader? The answer is not a simple one.

One method is when th 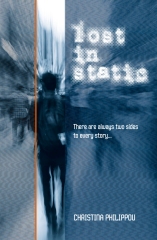 e narrator knows something but, because it is so obvious to them, they do not actually bother explaining. This makes it increasingly frustrating for the reader. For example, in the case of one of my protagonists, we know that he is writing to someone. But who is he writing to? He doesn’t bother to tell us until quite far into the plot because he knows exactly who he’s writing to, but the reader wants to know because it potentially could (and does) affect the story.

Another method is the idea of an unreliable narrator. As Lost in Static tells the same story from four (sometimes contrasting) points of view, some narrators spin the events in a different way than others. But how can the reader work out who is telling the truth and who is lying? This becomes even more difficult when the protagonists themselves don’t realise their memory is shaky or that they don’t have the full facts.

Which brings us back to the
traditional role of mystery in fiction – the mystery that not even the protagonists are aware of the answers to because, well, they are a mystery that needs to be solved…

metimes growing up is seeing someone else’s side of the story.

Four stories. One truth. Whom do you believe?

Callum has a family secret. Yasmine wants to know it. Juliette thinks nobody knows hers. All Ruby wants is to reinvent herself.

They are brought together by circumstance, torn apart by misunderstanding. As new relationships are forged and confidences are broken, each person’s version of events is coloured by their background, beliefs and prejudices. And so the ingredients are in place for a year shaped by lust, betrayal, and violence…

Who is Christina Philippou?

Christina Philippou’s writing career has been a varied one, from populating the short-story notebook that lived under her desk at school to penning reports on corruption and terrorist finance. When not reading or writing, she can be found engaging in sport or undertaking some form of nature appreciation. Christina has three passports to go with her three children, but is not a spy. Lost in Static is her first novel.

Christina is also the founder of the contemporary fiction author initiative, Britfic.

Lost in Static is the gripping debut from author Christina Philippou. Whom will you trust?