Today on Mystery Mondays we welcome author P.J. Lazos. Also known as Pam, she wrote OIL WATER,  about oil spills and green technology. She’s also an environmental lawyer, so I’m guessing she knows what she’s writing about. Sound interesting? You can find out more after her guest post.

If you need help getting your creativity working, this is the blog for you. Over to Pam.

Prompt. The word is fascinating and versatile. It’s a noun, a verb, an adjective and an adverb. Holy guacamole, how often does that happen? It’s like winning the EGOT — Emmy, Grammy, Oscar, and Tony, a laudable goal shared by only 12 lucky and hardworking people. It makes you wonder, is there anything a word like that can’t do? (I found a blog post on the internet that listed 56 similarly situated words (https://onweb3.wordpress.com/2013/08/14/663/); prompt hadn’t made the list.)

I wish I would have thought of prompt during one of the timed writing exercises I used to do with a friend in the now defunct Borders cafeteria. We’d sip fancy coffees and rip small strips of paper from our notebooks, then write one word down on each slip of paper, three nouns, three verbs and three adjectives, eighteen slips of paper total, separated into three different piles. (We left out adverbs. Call us prejudiced, but we just didn’t see the need.) We’d pull a word from each of the piles and do timed exercises of five, ten, and fifteen minutes.

The rules were simple. Write until your hand falls off. Haha! No, actually, it was write using one word chosen from each of the three piles for the prescribed minutes without stopping: not to ponder a plot twist, not to reach for a word that was escaping your pen, not even to go to the bathroom. It was invigorating and imaginative, and it shushed the internal editor more succinctly than any of the other writing exercises I’d tried. Sometimes we’d tweak the rules, adjusting the time or using twice as many words, but the basic premise was the same. This simple writing prompt fueled the basis for scene after scene of a novel that would eventually become “Oil and Water,” but it also taught me something about the craft of writing: imagination is like every other muscle in the body; you need to flex it if you want to keep it in shape. For me, writing prompts facilitated my workout.

So much of our day is spent elsewhere, unconsciously trolling the past or hypothesizing about the future. Cutting through the madness of life is challenging, but the here and now is where you want to be. If done with full awareness, the art of writing 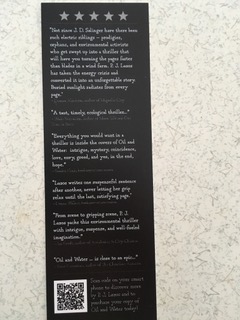 can facilitate a sacred communion with your Higher Self. When you tune in to your Higher Self, the internal editor — the one that never really stops criticizing — is silenced, brushed aside to allow the light of clarity to shine through and the quiet little voice to finally get a few minutes of air time. Don’t banish the internal editor because you’ll need him or her later in the rewrite stage — just tell them to shush up so the quiet little voice can speak.

You can also get that kind of unfettered access writing morning pages. The minute you are out of bed, write down whatever comes to you, a dream, some leftover baggage from the day, any nervousness about the day to come, all of it, and when you’re done, start the day fresh.

Here’s another one. Grab a tangerine, or an apple, the fruit doesn’t matter, or if you don’t like fruit, grab a wrench, then set a timer for fifteen minutes, more if you’re brave, and write down everything you can about the tangerine.   Notice the color, the texture, the feel of its skin against your own, the little indentation on the one side and the little nub of a branch on the other where it was plucked from its momma tree. Notice the hexagonal star pattern surrounding the little nublet — not a word, but it describes the little wooden branch remnant on the top center of the tangerine perfectly, doesn’t it? Describe the smell and whether this is what you thought the color orange would feel like. Rub it against your cheek and lips and describe the almost plastic feeling of the skin and balance it on your head and talk about the weight or how easy or hard it is to balance it there and then write a sentence with a tangerine on your head (which does great things for your posture), and talk about how hard it was to keep it from falling, and on and on until your timer goes ding and THEN, eat the tangerine and describe that, so tart, so sweet, so delicate. If you chose a wrench as your object, you’ll have to leave this last part out. The exercise is freeing because there’s really no goal other than to train yourself to observe and describe. Do it a hundred times and you’ll have mastered the art of observation and description which is all writing really is.

Got it? Great! I challenge you to choose your prompt and get to work. Your readers are waiting. You’re going to be amazing. 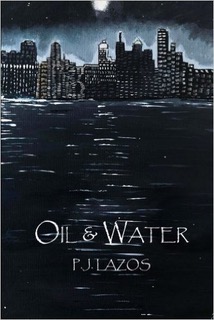 When inventor Martin Tirabi builds a machine that converts trash into oil it sends shockwaves through the corporate halls of the oil cognoscenti. Weeks later, Marty and his wife, Ruth are killed in a mysterious car accident. Their son, Gil, a 10-year old physics prodigy is the only one capable of finishing the machine that could solve the world’s energy problems.  Plagued with epilepsy from birth, Gil is also psychic, and through dreams and the occasional missive from his dead father he gets the push he needs to finish the job.

Meanwhile, Bicky Coleman, head of Akanabi Oil is doing his best to smear the planet in it. From a slow leak in the Gulf of Mexico to the most devastating oil spill the Delaware River has ever seen, Akanabi’s corporate practices are leaving oily imprints in their wake. To divert the tide of bad press, Bicky dispatches his son-in-law and Chief Engineer, David Hartos to clean up his mess.  A disillusioned Hart, reeling from the recent death of his wife and unborn child, travels to Philadelphia to fulfill his father-in-law’s wishes.

There’s no such thing as coincidence when Hart meets Gil and agrees to help him finish Marty’s dream machine. But how will he bring such a revolutionary invention to market in a world reliant on fossil fuels and awash in corporate greed?  To do so, Hart must confront those who would quash the project, including his own father-in-law.

You’ll find murder, mystery, and humor as black as fine Arabian crude filling the pages of Oil and Water. The characters are fictional, but the technology is real. What will we do when the oil runs out?   Open up and see.

P. J. Lazos is an environmental lawyer and author of the recently released novel, Oil and Water, an environmental murder mystery about oil spills and green technology; of Six Sisters, a collection of novellas about family and dysfunction; the creator of her lifestyle and literary blog, Green Life Blue Water (greenlifebluewater.wordpress.com); on the Editorial Board for the wH2O Journal, the Journal of Gender and Water (University of Pennsylvania) (http://www.wh2ojournal.com); a blogger for the Global Water Alliance (GWA) in Philadelphia (http://www.globalwateralliance.net), a literary magazine contributor (Rapportage); a former correspondent for her local newspaper (LNP); former Editor-in-Chief for the Environmental Law and Technology Journal at Temple Law School; a ghostwriter; the author of a children’s book (Into the Land of the Loud); an active and enthusiastic member of the Jr. League of Lancaster, and, because it’s cool, a beekeeper’s apprentice. She practices laughter daily.